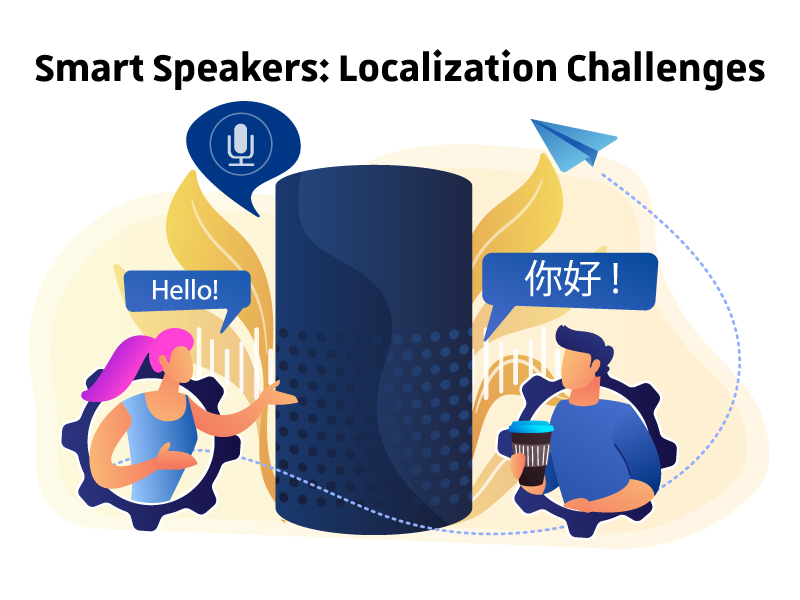 A quarter of Americans have at least one smart speaker device. But what languages can these devices speak? In this article we will discuss the challenges that the localization of smart speakers may entail.

What Is A Smart Speaker?

A smart speaker is a speaker with an integrated virtual assistant that enables human-machine interaction. We can ask our smart speaker trivial questions about the weather or latest news, or make it the central hub for our smart home to control our electronic devices, be it a fridge or a TV. In the past few years, smart speakers have entered many homes all over the globe. According to The Smart Audio Report, in 2019, 24% of adult Americans were using at least one smart speaker device. But what about other countries? How hard is it to localize a language for a smart speaker?

What Languages Can You Speak with Your Smart Speaker?

Language localization for a smart speaker is a costly and elaborate development process, as it requires the collection, analysis and testing of a vast amount of speech data. We cannot just take the strings of information used to generate the input and output for an English-speaking smart speaker and translate them word-for-word into, say, Russian. The goal of a virtual assistant is to imitate natural human conversation, so we expect our smart speaker to have not only grammatically correct speech, but also some knowledge about our local culture. For example, we may want it to tell us the local news or a joke that will be understood in a given cultural context.

In 2018 Google announced the localization of its virtual assistant into 30 languages. As of 2021, Google has not even reached half of this goal. This can be explained by the fact that it takes the same amount of effort and money to teach a virtual assistant to speak languages with only a few million native speakers as it does to introduce a much more commonly spoken language. It is no surprise that many smart speakers can speak Spanish (483 million native speakers), but not Latvian or Slovenian (1.3 and 2.5 million speakers respectively). It is therefore sensible to assume that it will probably take some time until languages with fewer native speakers become available on smart speakers – not so much because of their linguistic complexity, but due to their lack of potential profitability.

The big smart speaker producers have not only been slow in localizing the less widely spoken languages, but also some of the more widely spoken ones, such as Chinese and Russian. This delay opened the door to local tech companies to introduce their monolingual smart speakers. For example, the Yandex.Station smart speaker with its integrated virtual assistant Alice has literally no competition on the Russian-speaking market as there is no other smart speaker supporting the Russian language. The advantage of such monolingual smart speakers is that local companies may concentrate on developing a product specifically designed for their own market. This allows them to create a product which sounds more authentic and is better able to reflect the specific local cultural nuances than its international counterparts.

Future Prospects of Smart Speakers Across the Globe

Artificial intelligence technology is constantly developing, giving us reason to believe that the costs for smart speaker localization will decrease with time. This will allow smart speakers to speak more languages and acquire more functions, making them increasingly useful for many households all over the world.

What is your experience with smart speakers? Do they speak your native language yet? Let us know in the comments.

Do you want to learn more about localization? Apply to the TCLoc Master’s Program now!