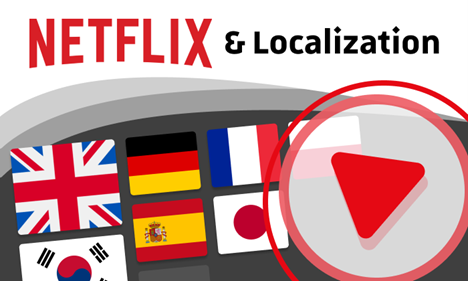 As you might know, Netflix has become one of the largest online streaming services. Their product is available in over 190 countries and currently supports 26 languages. Netflix is still fine-tuning its multilingual localization processes to ensure that all its content is universally accessible.

How does a streaming organization as large as Netflix handle localization across the world?

What Is Localization and Why Is It Important For Netflix?

The Art of Adapting to Cultural Zones and Values

Localization (L10N) is a key phase within the process that you cannot ignore when expanding services into the global market. It is about adapting a product from a specific region or country. Basically, it refers to translating multimedia content such as software, video games, websites, as well as audio and video.

When localizing, you should take into consideration cultural differences and diverging values. It can indeed become a significant challenge when you have to repeat this process for five or more languages. Netflix changes the catalog choices depending on the region. You do not find the same content if your IP address is in France, India, or South Korea.

However, localizing is much more complex than just adapting a movie and show selection. When localizing a user interface, you have to think about readjusting several technical aspects which differ from country to country.

Pseudo-localization is an important phase within the localization process because it specifies technical definitions regarding aspects of text adaptation to a target language. It actually becomes a prerequisite when you have to translate from a Western language to an Asian one for example, e.g. from English to Chinese or Japanese.

But what is exactly pseudo-localization?

In their Netflix Tech Blog, Netflix published an article about the technical issues they regularly face when updating or adapting new content on their multilingual user interface.

To summarize, pseudo-localization can be defined as the phase in which one adapts and edits every piece of text of a user interface to a target language.

Who Handles the Localization on Netflix?

One Project to Manage, Several Tasks to Divide

Each person who takes part in this process has a specific role. There are several ways to split the tasks of a multilingual localization project. With so much content, you may ask yourself how Netflix handles the work of translating all of this efficiently.

Netflix outsources translations. All of these tasks are usually executed by several Directors of Localization, Localization Project Managers, and Language Managers. They are the link between Netflix and external localization vendors or freelance translators working for the streaming services company.

In 2017, Netflix launched a global campaign to hire the best translators to increase the quality of their subtitles, the Hermes Portal. This campaign encompassed a global language, translation and technical test accessible worldwide for anyone who had access to Netflix. However, given that Netflix is more specialized in technology development and project management than in localization, the project turned out to be too costly and ambitious. The company had to cancel it and leave this process to their external localization vendors.

All in all, Netflix handles the management as well as the technical aspects of a localization project (pseudo-localization, content workflows) while external partners deliver localized contents such as translated subtitles and dubbing. When content does not belong to the company, Netflix has to buy the publishing rights from other companies and does not necessarily have permission to edit subtitles.

Even for Netflix, Multilingual Localization Is Challenging

In the online streaming industry, managing a multilingual localization project is a challenge because they have to tackle every aspect of the translation process. Languages and technologies have been evolving at a fast pace in recent times and with innovation, organizations have found ways to manage it.

Although Netflix had considered having its own in-house localization team, it decided against it and continued with outsourcing to external translation teams around the world. This illustrates that even a company with the reputation of Netflix is still learning and developing strategies to manage localization projects.

We could have also taken the examples of other streaming services such as Amazon Prime Video, YouTube Premium, or the more recent Disney+, as each of those companies are facing similar challenges and are actively researching for creative solutions to improve the quality of the contents they are sharing with their subscribers.

Sharing your thoughts about Netflix’s localization management may bring some new and interesting insights on this topic. Either way, feel free to comment here!