South Africa is one the most linguistically diverse countries in the world, and should therefore be a hotbed for localized digital content. In this article, I shed some light on the current state of localization in the country, while also highlighting the value of localization in language standardization.

As we speak, localization is helping many thousands of South Africans to access the Web and produce content in their native languages. Yes, patriotic localizers have done much to heal the wounds of a country which continues to be divided along racial and linguistic lines. The benefits of localization in the South African context are obvious, so why are we not seeing more localized content from the southern tip of Africa?

In corporate South Africa, large companies have long been aware of the benefits of localization. In an article entitled The Real Africa is not English, nor Portuguese, nor French1, Ian Henderson, CIO and CEO of the software development company Rubric South Africa, mentions how some big South African companies, such as Vodacom, MTN, Checkers and Nandos, have already started localizing their websites for speakers of indigenous African languages. These companies are doing so in a bid to gain access to lucrative emerging markets in other African countries.

Clearly the focus remains international. So, how could an increased localization benefit everyday South Africans? To answer this question, I mined the South African Web and came up with a few suggestions.

Tech journalist Lungelo Shezi stated in a recent htxt.africa article that nearly 25 million South Africans have access to the Web, a statistic which translates to an internet penetration of 49%. Nearly 60% of the country’s adult population owns a smartphone, whereas only 13% owns anything resembling a PC. In addition, there is a definite market for localized content, since only 9.6% percent of adults are native English speakers. The reason why so little content is being produced is because local languages generally suffer from a lack of standardization.

Increased localization efforts could be an ideal antidote for decades of neglect. Previously disadvantaged languages could potentially undergo standardization through translation, since new terms and expressions would have to be coined to accommodate concepts from the IT, engineering and medical fields.

Translation was used to great success by the Apartheid dispensation to push Afrikaans towards a sufficiently standardized state. Why should translation, and localization for that matter, not be used to do the same for indigenous South African languages such as isiZulu and Sesotho?

In fact, the standardizing effect of localization is bolstered by the easily accessible platform of the Web, which is increasingly helping South Africans of all linguistic backgrounds to publish locally produced content. 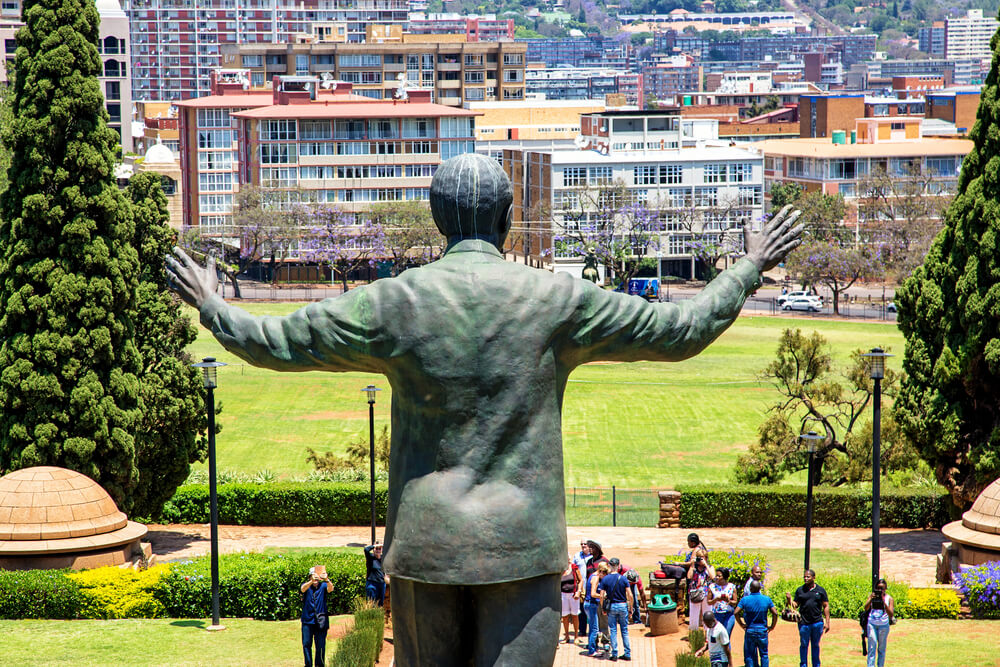 Nelson Mandela is held by many as a symbol of reconciliation. His statue overlooks the county’s capital – image source: Shutterstock

Localization and the future

The potential for localization to standardize indigenous languages and preserve culture is starting to become apparent in rural South Africa. The Ulwazi Programme is a large-scale localization project taking place in the KwaZulu-Natal province. Here, community members are using a wiki-based platform to preserve isiZulu culture and language by compiling an extensive digital archive of locally produced isiZulu texts. The project is immensely popular among isiZulu speakers and may well be indicative of a serious demand for localized content in South Africa as a whole.

Individual translators and developers are also doing their part to localize the SA Web. I recently read an impassioned blog article by Musa Baloyi, a Xitsonga-speaking software developer, entitled Localization and Digitization in Africa. Xitsonga speakers represent nearly 4.5% of the population. In the article, Baloyi expresses his deep frustration with the seeming incompatibility of his mother tongue with most word processing software packages. I consider Baloyi to be a true visionary, since he took things into his own hands, compiling an online Xitsonga dictionary in the process.

What content should South Africans localize to have the greatest impact on language standardization? The answer is the humble mobile app. In fact, nearly 52% of first-time internet users in South Africa connected to the Web via smartphone in 2014. Furthermore, 66% of internet users at the time were speakers of indigenous South African languages. Everyday South African are turning to the mobile Web, so should localizers.

Henderson, I. (2013) The real Africa is not English, nor French, nor Portuguese. Available from: http://www.itnewsafrica.com/2013/02/the-real-africa-is-not-english-nor-french-nor-portuguese/ [Accessed 17th August 2017].

University of Witwatersrand (2013) The new wave: Who connects to the internet, how they connect and what they do when they connect. Available from http://www.networksociety.co.za/report-highlights.php [Accessed 22nd August 2017].

Find out more or adjust your settings.

This website uses cookies so that we can provide you with the best user experience possible. Cookie information is stored in your browser and performs functions such as recognising you when you return to our website and helping our team to understand which sections of the website you find most interesting and useful.

Strictly Necessary Cookie should be enabled at all times so that we can save your preferences for cookie settings.

If you disable this cookie, we will not be able to save your preferences. This means that every time you visit this website you will need to enable or disable cookies again.